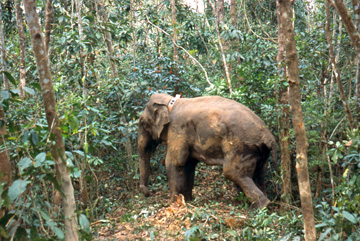 All Telonics collars are built to order and customized for specific species and projects. Elephants are typically instrumented with collars, similar to most terrestrial mammals, but collar design needs to be specialized and particularly durable because of the animal's large size and great strength.

Telonics can currently provide GPS/Iridium, GPS/Globalstar, GPS/Argos, Argos-only, or VHF-only collars for elephants. VHF circuitry is included in all the satellite-linked systems; thus allowing tracking from the ground or aircraft if desired.

Additional information on each of these systems, and current Telonics models, is available through the following links. The electronics and power supplies used on elephants are modified versions of the largest models noted under each link.

For studies on terrestrial mammals where GPS data is transferred from the animal to users via a satellite system, most current applications use either the Iridium or Globalstar satellite system. Argos can also be used to transfer GPS data, or it can be used to obtain positions without use of GPS, but in recent years it has largely been replaced by Iridium and Globalstar for terrestrial applications. Models including GPS receivers provide much more accurate positions than Argos-only models, and Iridium and Globalstar typically offer considerably less-expensive data transfer rates than Argos. Globalstar is most suitable to applications with ~6 or fewer GPS positions per day. Iridium is a 2-way system that provides a number of benefits, including the collar "knowing" whether or not data was received by the satellite and thus whether or not it should be tried again; and various programming options including auxiliary schedules and geofencing.

Elephant collars are constructed from heavy-duty belting. Our current design typically uses two collar sections, one with the transmitter electronics, power supply, and antennas which fits dorsally on the elephant's neck, and the other which includes a counterweight and fits under the neck and up the sides of the neck. The electronics and power supply are hermetically-sealed in a metal canister, and the GPS and Iridium or Globalstar patch antennas are mounted on the exterior of the canister to face skyward. The canister and antenna are enclosed between two layers of collar material with a surrounding urethane cast to further physically protect the components. The VHF antenna, and Argos antenna (if used) are whip antennas encased between the two layers of collar.