Telonics transmitters for terrestrial mammals are usually provided on collars. A static attachment collar is included in the base pricing of GPS and satellite-linked collars, with the GPS and/or other satellite antennas incorporated into the overall collar design. Collar pricing is additive on most VHF configurations. Collars are built to order, with adjustment ranges and other specifications defined at the time of order. Customized collars or other attachment mechanisms can be provided at additional cost.

Details defined at the time of order include:

Many of the items above have somewhat standard selections dependent on species and the model selected; however, there are often options available as discussed at the time of order.

Most Telonics static collars are constructed of two layers of biologically inert material capable of maintaining pliability and flexibility at ambient temperatures from -40°C to +70°C. Standard collar materials are TPU, butyl, and urethane. TPU has finished edges, and is available in widths of 1, 1.5, and 2 inches. Butyl and urethane collars are typically provided in the same widths, but can be cut to width or tapered if required.

The standard adjustment increment is 0.5-inch for most collars, but 0.25-inch for some smaller collars.

Defining the adjustment range as precisely as possible for the specific animals you intend to collar is important such that the collar conforms appropriately to the animal's neck. For satellite-linked systems, a precise adjustment range is especially important to provide for positioning of the satellite antennas on the back/top of the neck for optimal communication with the satellite.

Precisely-timed collar release mechanisms are available for collars for larger species. Inclusion of such releases must be indicated at the time of order because it impacts collar design. Depending on overall collar size and design, releases can either be incorporated into the body of the collar or used in place of standard collar attachment hardware.

Choosing the most appropriate antenna design is critical to the successful deployment and function of telemetry collars. Many species use habitats or have behaviors that make maintaining long-term integrity of the antenna difficult. Thus, the challenge is how to provide the best signal propagation (or reception) while designing the antenna for extended deployment on a wild animal.

With VHF-only collars, there is only the VHF whip antenna to consider, and the primarily consideration is whether a portion of the whip should be external. A similar consideration applies to the VHF antenna on satellite-linked collars. Having at least the end of the VHF antenna outside the collar and not right against the animal's body helps with signal propagation, however, any external portions are subject to breakage, which will reduce VHF transmission range. With many ungulates (at least those in open habitats) having a portion of the antenna external is often the best selection because the antenna has good likelihood of outlasting the battery. With many carnivores or species in dense habitats external portions of the antenna would likely be broken before the battery dies, so the VHF antenna is usually enclosed as completely as possible in the collar with only its tip exposed. If size of the animal allows, VHF antennas are typically provided as a 1/4-wave whip (50 cm at 150 MHz). With small species a full 1/4-wave whip is often not biologically reasonable, so antennas are often shortened and/or a portion extends out the end of the collar in order to provide and protect the maximum length of antenna possible.

The three primary options for VHF antennas are: 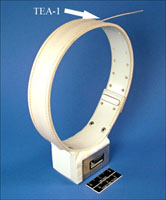 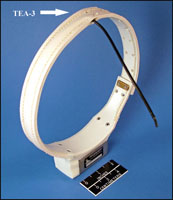 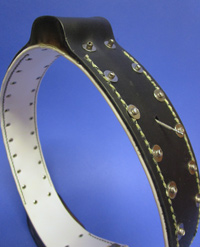 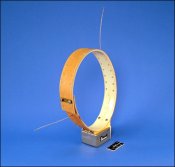 GPS and Other Satellite-Linked Antenna Options

Collars that collect GPS positions must have an antenna to receive signals from the orbiting GPS satellites. GPS and other data from such collars are stored on board the collars, but in most applications the positions are also transmitted out from the collar; typically using either the Iridium or Globalstar satellite systems. This requires either Globalstar or Iridium antennas too. In most applications it is important to have the Iridium or Globalstar antennas mounted such that they are oriented up towards the satellite, thus, dorsally mounted on the collar. The antennas are protected by polycarbonate housings and attached to the main electronics and power supply by a coaxial cable routed through the collar. The size of these "patch" antennas is dependent on collar width. For species that are predictably tough on collars, the CAST-5 option (see Casting Options below), can add additional physical protection to dorsally-mounted antennas.

The GPS antenna is frequently dorsally mounted to provide the best reception, but the GPS connection between collar and satellite is more robust than the Iridium or Globalstar connections. For some applications it is reasonable to beneficial to have the GPS antenna mounted on the side of the main transmitter housing. This "side-looking" orientation is more durable. A side-looking GPS antenna is standard in Globalstar RECON models, and can be a preferred option for species in relatively open habitats, particularly if there is concern about chewing or overall collar abuse. In contrast, a dorsally-mounted antenna is preferable for performance in general, and particularly with animals in areas with dense vegetative canopies and/or where topography blocks portions of the sky. CAST-5 is also an option for dorsally-mounted GPS antennas. 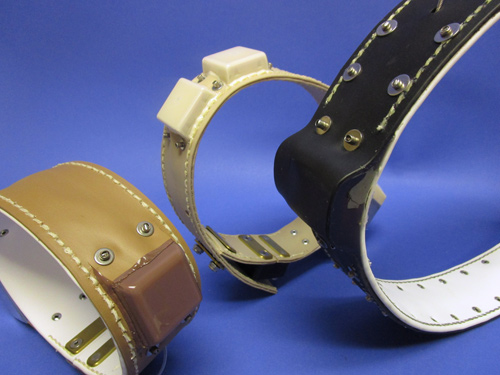 Some, generally older model collars use the Argos satellite system. Argos uses a whip antenna similar to that used for VHF, but shorter since the transmission frequencies are higher. In applications where the external portion of the antenna would likely be broken, it can be protected by a radome; e.g. the RADOME-1 as has been used on Argos collars for wolves and bears. 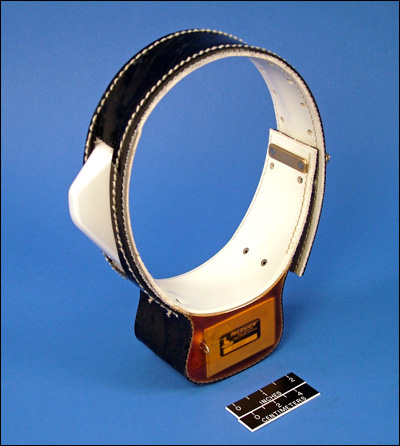 For some applications it is advisable to cast either the antenna end of the transmitter housing or the entire housing in a high-density polymer that acts as a shock absorber. The casting material is not required for waterproofing of the unit; however casting is required for some species to provide appropriate durability and for the Telonics warranty to apply. For example, VHF transmitters for moose, elk, some other large ungulates and all marine mammals must have the antenna end of the transmitter housing cast using the CAST-2 or CAST-4 option. A selection between CAST-2 or CAST-4 is also included as standard for most satellite collars. CAST-1 is required for VHF or satellite units for large felids, canids, ursids, bighorn sheep rams, feral hog, buffalo, and other species that are predictably tough on collars. The CAST-3 option (internal casting) is advisable for some applications to prevent the unit from crushing; e.g. collars designed for elephants are cast in this fashion. CAST-5 provides additional physical protection to GPS, Iridium, and/or Globalstar antennas that are mounted dorsally on the collar; it is suggested in applications on species that are known to be particularly physically hard on collars such as bison, feral hog, tapir, and wolves.

CAST-1, entire housing cast between the two layers of the collar 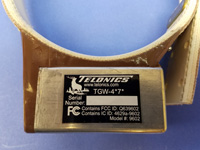 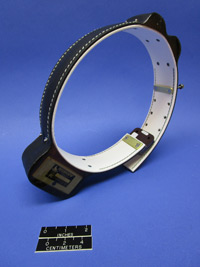 One piece of collar attachment hardware is provided with most collars. The specific hardware used is determined by the collar width and thickness. Telonics hardware is specifically designed and custom manufactured for the attachment of collars. The backing plates are non-corrosive brass with smooth surfaces and beveled edges to avoid sharp surfaces coming into contact with the animal. The nylon locking nuts are easily secured and have proven highly reliable.

If you want spare hardware, that can be purchased separately. Please order by part number.

Telonics collars are typically constructed using an outer layer of brownish butyl, black urethane, or TPU, which is stocked in a few colors depending on collar width and thickness. If users want a larger selection of colors, or different color collars within an order, an outer layer can be sewn onto the collars.

Those considering color-coded collars should be aware of the following: 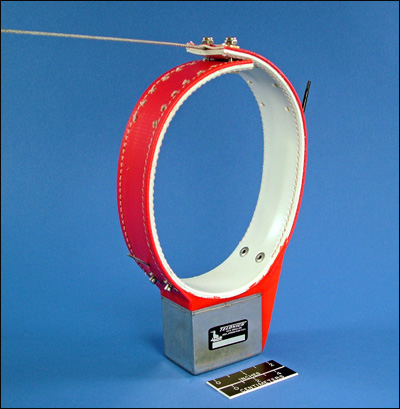 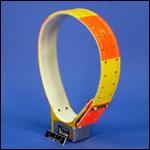 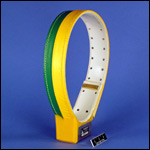 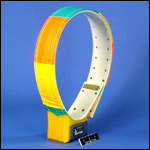