Aircraft have been used for many years to aid in tracking of VHF transmitters. Specific equipment used can vary depending on the type of aircraft, how those in the aircraft communicate, and how often such tracking is done, but a typical system would include the following components:

The versatile Telonics RA-2AHS Antenna is designed for mounting on aircraft as well as for hand-held use or as part of the RA-NS Precision Direction Finding System. For use on aircraft, Telonics typically recommends the antenna be reinforced as noted below as an RA-2HS.

TAB-1 through TAB-6 brackets are sold as pairs. They are designed to secure RA-2A or RA-2AHS antennas to the struts of high-winged light aircraft in left-looking and right-looking orientations. The combined antenna pattern is as shown below. A TAC-2 Control Box is used to switch between the right, left, and both antennas. 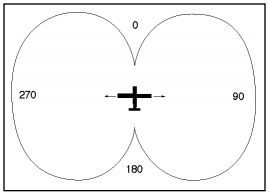 Holds one RA-2A or RA-2AHS in a forward-looking orientation by attachment to one skid as shown below.

This is a pair of THB-1 brackets with adapters designed to hold two RA-2A (RA-2AHS) antennas to the skids of a Hughes 500 series helicopter in left- and right-facing orientation. The antennas are combined using a TAC-2 Control Box. 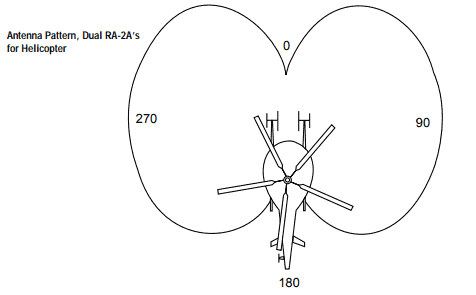 Regulations governing the attachment of equipment to aircraft vary depending on ownership, use and location. Users should check with appropriate authorities regarding current regulations. The International Association of Natural Resource Pilots is a source that can make suggestions based on practical experience. You may also wish to refer to the Federal Aviation Regulations concerning type certification requirements.

FAA inspection standards vary depending on how individual FAA inspectors classify the bracket and regional FAA practices and policies.

Government owned aircraft can often mount the brackets using a simple logbook signoff. Privately held aircraft require FAA inspection to comply with FAA rules. Compliance requirements within the FAA have not been consistent from inspector to inspector or region to region.

In some parts of the US, aircraft brackets are considered a "minor alteration" and a simple logbook sign off can be completed by a certified A&P to achieve full compliance with FAA rules.

In other regions a certified mechanic fills out an FAA form 337 Major Airframe Alteration. The form describes the alteration (installation). This form is then submitted to the FSDO for a field approval. This approval is for a specific aircraft serial number and must be done again even if you outfit a second aircraft of the same model.

In other areas of the country inspectors have asked for a Supplemental Type Certificate (STC). An STC is not available from Telonics for any of our antenna mounting brackets although the user may choose to pursue an STC on their own using their A&P and at their own expense. If the STC is required by your FCC inspector, be aware the process can be expensive and time consuming. The Ohio Department of Transportation has an STC for the Cessna 182 (STC SA182CH). STCs are based on aircraft model so mounting on one Cessna aircraft does not mean that the bracket is approved for other Cessna aircraft models.